On Monday, Mr. Marcel showed up at my house with this tiny, fluffy, ridiculous dog.  He was quite young, probably about 8 weeks old by my estimation and he was crawling with insects.  I took one look at him and knew that he was a Tanzanian dog and not an American dog like me.  It turns out, Mr. Marcel adopted this dog so I guess I have to become friends with him.  I suppose he is pretty cute for a Tanzanian dog, but I guess I’ll let you all be the judge of that. 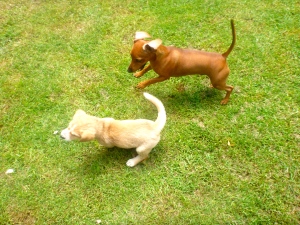 When Farley showed up on Monday, he didn’t actually have a name yet, so mom just called him Fleabag because of the fleas crawling all over him.  Mom immediately took me and Fleabag into the shower and she hosed him down and lathered him up with my puppy flea shampoo and washed the crap out of him for at least 30 minutes, but his hair was super thick (the opposite of my sleek hair) and he was so infested with fleas that some still remained.  Mom also said she found some things attached to his skin, called ticks.  YUCK!

After washing Farley Fleabag, under my supervision of course, she took us outside so we could get to know each other better.  I chased him around to see what his playing skill-level was, and unsurprisingly, he was super uncoordinated.  He was seriously falling over every other second, LAME! 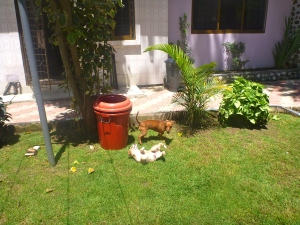 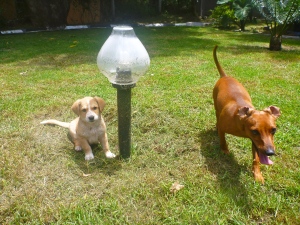 The only thing this Fleabag had to learn was that mom was MY mom and no one else’s.  Period.  And I made sure that was very clear. 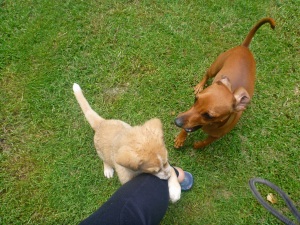 HEY! Get off my mom

You know how Fleabag eventually became Farley?  Well, mom and Mr. Marcel were talking about how Fleabag was kind of fat, and dopey, but in a funny way like a comedian.  Mom mentioned that he reminded her of Chris Farley and Mr. Marcel said that he really liked Chris Farley and then mom said that Farley would actually be a great name for a dog and that they could call Mr. Marcel’s new dog Farley Fleabag, genius!  I love my mom 🙂 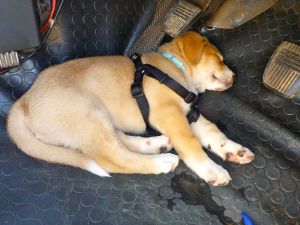 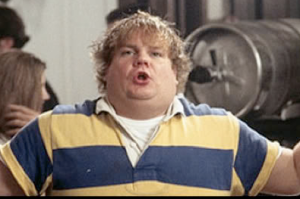 You know what else I think of when I see Farley Fleabag?  The Honey Badger, because like Farley Fleabag, he just doesn’t give a sh*t, watch for yourself: http://www.youtube.com/watch?v=4r7wHMg5Yjg.